The story of Wimbee Creek Farm stretches back to at least 1600. According to historians, the Native American Wimbee (also Wimbehee) tribe lived / hunted / fished in this area for more than 150 years. This tribe was part of the Cusabo tribe, with an estimated 3000+ members at their peak. They remained in this area until approximately 1750 when other settlers, both British and the Yuchi tribe took control of the area.

While the Wimbee were here, planted crops consisted mostly of corn, beans, squash, and melons. Fruit orchards of peaches and plums were also raised.

The history up until Maria and Gary Baldwin “found” Wimbee Creek Farm several years ago is still being researched; however, it was farmed on a full time basis in the 1900s, through to about 1975. The families residing here farmed a full complement of crops, including corn, melons, squash, tomatoes, beans, greens and many other vegetables.

The farm buildings and current farm house were built in multiple phases. One of the structures was moved from Parris Island (floated up Wimbee Creek) when the US Marine Corp was upgrading the base quarters.

The main farmhouse was constructed in phases. The main house was originally a barn, extended via stick built construction to become a small farmhouse. Subsequently, two older single room structures from Colleton County were moved onto the property, and connecting structures were built to integrate these two new structures with the existing structure into a single home.

When we first visited the property… we thought “this is it”! Since then, we’ve been growing beautiful flowers for use and enjoyment by local and regional designers, wedding planners and people who love flowers throughout the SC Lowcountry.

Please contact us if you have additional information about the farm’s history. 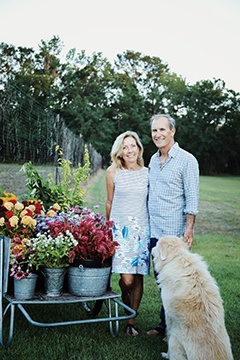